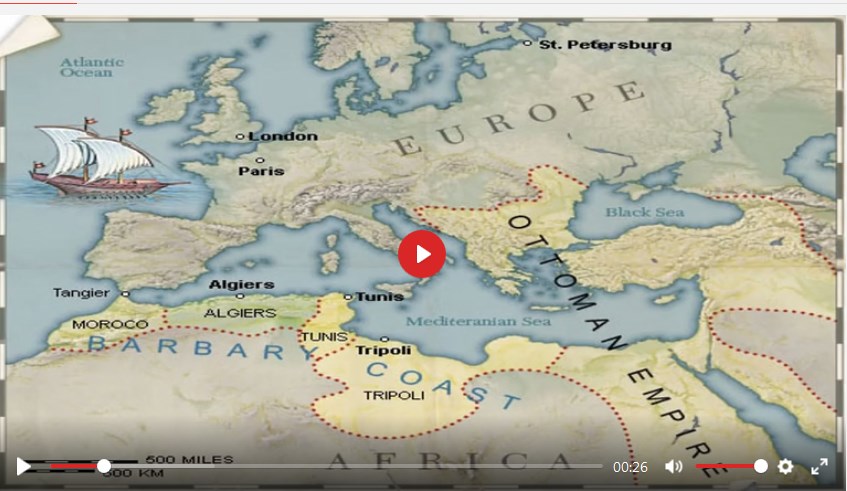 Christians were sometimes tortured to force a conversion to Islam, males could be raped, and punishment was appalling. 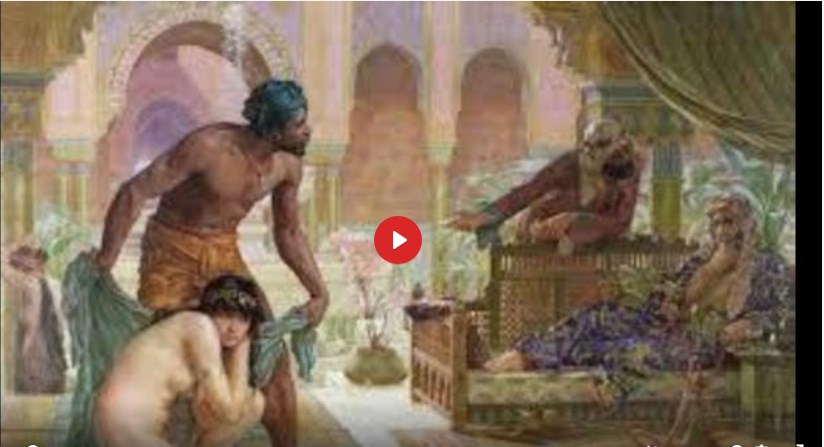 Christians were sometimes tortured to force a conversion to Islam, males could be raped, and punishment was appalling. One slave had his arms and legs broken with a sledgehammer, another was thrown from a high wall onto a meat hook and left to die, while another was dragged naked through the streets, his ankles tied to a horse’s tail.

Ohio State University history Professor Robert Davis describes the White Slave Trade as minimized by most modern historians in his book Christian Slaves, Muslim Masters: White Slavery in the Mediterranean, the Barbary Coast and Italy, 1500–1800. Davis estimates that 1 million to 1.25 million white Christian Europeans were enslaved in North Africa, from the beginning of the 16th century to the middle of the 18th, by slave traders from Tunis, Algiers, and Tripoli alone (these numbers do not include the European people which were enslaved by Morocco and by other raiders and traders of the Mediterranean Sea coast) 16th- and 17th-century customs statistics suggest that Istanbul’s additional slave import from the Black Sea may have totaled around 2.5 million from 1450 to 1700. The markets declined after the loss of the Barbary Wars and finally ended in the 1830s, when the region was conquered by France.

Hundreds of thousands of Europeans were captured by Barbary pirates and sold as slaves in North Africa and the Ottoman Empire between the 16th and 19th centuries. These slave raids were conducted largely by Arabs and Berbers rather than Ottoman Turks. However, during the height of the Barbary slave trade in the 16th and 17th centuries, the Barbary states were subject to Ottoman jurisdiction and ruled by Ottoman pashas. Furthermore, many slaves captured by the Barbary corsairs were sold eastward into Ottoman territories before, during, and after Barbary’s period of Ottoman rule.

The Barbary Muslim pirates kidnapped Europeans from ships in North Africa’s coastal waters (Barbary Coast). They also attacked and pillaged the Atlantic coastal fishing villages and town in Europe, enslaving the inhabitants. Villages and towns on the coast of Italy, Spain, Portugal and France were the hardest hit. Muslim slave-raiders also seized people as far afield as Britain, Ireland and Iceland.

In 1544, the island of Ischia off Naples was ransacked, taking 4,000 inhabitants prisoners, while some 9,000 inhabitants of Lipari Island off the north coast of Sicily were enslaved.870 Turgut Reis, a Turkish pirate chief, ransacked the coastal settlements of Granada (Spain) in 1663 and carried away 4,000 people as slaves. In 1625, Barbary pirates captured the Lund Island in the Bristol Channel and planted the standard of Islam. From this base, they went ransacking and pillaging surrounding villages and towns, causing a stunning spectacle of mayhem, slaughter and plunder. According to Milton, ‘Day after day, they struck at unarmed fishing communities, seizing the inhabitants, and burning their homes. By the end of the dreadful summer of 1625, the mayor of Plymouth reckoned that 1,000 skiffs had been destroyed and similar number of villagers carried off into slavery.’871 Between 1609 and 1616, the Barbary pirates ‘captured a staggering 466 English trading ships.’

In 1627, Pirates went on a pillaging and enslaving campaign to Iceland. After dropping anchor at Reykjavik, his forces ransacked the town and returned with 400 men, women and children and sold them in Algiers. In 1631, he made a voyage with a brigand of 200 pirates to the coast of Southern Ireland and ransacked and pillaged the village of Baltimore, carrying away 237 men, women and children to Algiers.

The barbaric slave-raiding activities of the Muslim pirates had a telling effect on Europe. France, England, and Spain lost thousands of ships, devastating to their sea-borne trade. Long stretches of the coast in Spain and Italy were almost completely abandoned by their inhabitants until the nineteenth century. The finishing industry was virtually devastated.

Paul Baepler’s White Slaves, African Masters: An Anthology of American Barbary Captivity Narratives lists a collection of essays by nine American captives held in North Africa. According to his book, there were more than 20,000 white Christian slaves by 1620 in Algiers alone; their number swelled to more than 30,000 men and 2,000 women by the 1630s. There were a minimum of 25,000 white slaves at any time in Sultan Moulay Ismail’s palace, records Ahmed ez-Zayyani; Algiers maintained a population of 25,000 white slaves between 1550 and 1730, and their numbers could double at certain times. During the same period, Tunis and Tripoli each maintained a white slave population of about 7,500. The Barbary pirates enslaved some 5,000 Europeans annually over a period of nearly three centuries.

BitChute is funded by its community and promotes freedom of expression, please click here to support us.

The Ottoman penetration into Europe in the 1350s and their capture of Constantinople later in 1453 opened new floodgates for slave-trade from the European front. In their last attempt to overrun Europe in 1683, the Ottoman army, although defeated,..

The Majority Of Early Slaves Were White Europeans.

Things that used to be true before political correctness set in:

“The Barbary slave trade refers to the slave markets that were lucrative and vast on the Barbary Coast of North Africa, which included the Ottoman provinces of Algeria, Tunisia and Tripolitania and the independent sultanate of Morocco, between the 16th and middle of the 18th century. The Ottoman provinces in North Africa were nominally under Ottoman suzerainty, but in reality they were mostly autonomous. The North African slave markets were part of the Berber slave trade.

“Ohio State University history Professor Robert Davis describes the White Slave Trade as minimized by most modern historians in his book Christian Slaves, Muslim Masters: White Slavery in the Mediterranean, the Barbary Coast and Italy, 1500–1800. Davis estimates that 1 million to 1.25 million Europeans were enslaved in North Africa, from the beginning of the 16th century to the middle of the 18th, by slave traders from Tunis, Algiers, and Tripoli alone (these numbers do not include the European people who were enslaved by Morocco and by other raiders and traders of the Mediterranean Sea coast),[3] and roughly 700 Americans  were held captive in this region as slaves between 1785 and 1815.[4]

“From bases on the Barbary coast, North Africa, the Barbary pirates raided ships traveling through the Mediterranean and along the northern and western coasts of Africa, plundering their cargo and enslaving the people they captured. From at least 1500, the pirates also conducted raids along seaside towns of Italy, Spain, France, England, the Netherlands and as far away as Iceland, capturing men, women and children. On some occasions, settlements such as Baltimore, Ireland were abandoned following the raid, only being resettled many years later. Between 1609 and 1616, England alone had 466 merchant ships lost to Barbary pirates.[8]

“While Barbary corsairs looted the cargo of ships they captured, their primary goal was to capture non-Muslim people for sale as slaves or for ransom. Those who had family or friends who might ransom them were held captive, the most famous of these was the author Miguel de Cervantes, who was held for almost five years. Others were sold into various types of servitude. Captives who converted to Islam were generally freed, since enslavement of Muslims was prohibited; but this meant that they could never return to their native countries.[9][10]

“Sixteenth- and 17th-century customs statistics suggest that Istanbul’s additional slave import from the Black Sea may have totaled around 2.5 million from 1450 to 1700.[11] The markets declined after the loss of the Barbary Wars and finally ended in the 1800s, after a US Navy expedition under Commodore Edward Preble engaging gunboats and fortifications in Tripoli, 1804 and later when after a British diplomatic mission led to some confused orders and a massacre; British and Dutch ships delivered a punishing nine-hour bombardment of Algiers leading to an acceptance of terms. It ended with the French conquest of Algeria (1830-1847).

“Perpetrated largely on Europeans, and within in-land routes to indigenous European inhabitants. These peoples were systematically preyed upon and turned into slaves, acquired by Barbary pirates  during slave raids on ships and by raids on coastal towns from Italy to the Netherlands, as far north as Iceland and in the eastern shores of the Mediterranean.”

“White slavery, white slave trade, and white slave traffic refer to the chattel slavery of White Europeans by non-Europeans (such as North Africans and the Muslim world), as well as by Europeans themselves, such as the Viking thralls or European Galley slaves. From Antiquity, European slaves were common during the reign of Ancient Rome and were prominent during the Ottoman Empire into the early modern period. In Feudalism, there were various forms of status below the Freeman that is known as Serfdom (such as the bordar, villein, vagabond and slave) which could be bought and sold as property and were subject to labor and branding by their owners or demense. Under Muslim rule, the Arab slave trades that included Caucasian captives were often fueled by raids into European territories or were taken as children in the form of a blood tax from the families of citizens of conquered territories to serve the empire for a variety of functions. In the mid-19th century, the term ‘white slavery’ was used to describe the Christian slaves that were sold into the Barbary slave trade.”

COLUMBUS, Ohio – A new study suggests that a million or more European Christians were enslaved by Muslims in North Africa between 1530 and 1780 – a far greater number than had ever been estimated before.

In a new book, Robert Davis, professor of history at Ohio State University, developed a unique methodology to calculate the number of white Christians who were enslaved along Africa’s Barbary Coast, arriving at much higher slave population estimates than any previous studies had found.

Most other accounts of slavery along the Barbary coast didn’t try to estimate the number of slaves, or only looked at the number of slaves in particular cities, Davis said. Most previously estimated slave counts have thus tended to be in the thousands, or at most in the tens of thousands. Davis, by contrast, has calculated that between 1 million and 1.25 million European Christians were captured and forced to work in North Africa from the 16th to 18th centuries.