Thank you so much for watching this series from South Africa. If you'd like to know more about this particular camp and how you can help, please contact Kobus Cremer at This email address is being protected from spambots. You need JavaScript enabled to view it. If you'd like to support me in creating more projects like this one, please check out the links below. Patreon: https://laurensouthern.net/support/ Paypal: https://www.PayPal.Me/LaurenSouthern Bitcoin Wallet: 1JLM6GJwaPdNv4dM8K5KkcFHeziXXXMGKT Amazon Kitlist:

“Open your eyes and see that the world is waking up to the reality of the ANC and the failure of the New South Africa."

st Western media pretends to be representative of all people.  However, the reality is the plight of the one million white squatters living in camps in South Africa (SA) and is largely unreported.  The total European South African population in 2011 Census:  4,586.838 (8.9%), of the population and language used by  Europeans,  Afrikaans 61%, and English 36%.

We have put together the following article on the South African Family Relief Project (SAFRP), in the hope that this organizational structure can be established in other countries, i.e. a project to assist Europeans in need, in the first instance.  Please ensure that if you plan to set up a similar organization as mentioned in our AfriForum article, you must ensure that a security council is set up within your organization to prevent it from being overtaken by undesirables.  Refer to our Affirmative Action article for more information.

We are aware that there are many charities across the world, however, most of them do not specifically look after Europeans.  Many Europeans ARE helping black people In South Africa, first and foremost though, we MUST help our own people.

The South African government persecutes minorities most, especially the European white, Jewish and Boer communities through Affirmative Action laws.  This greatly reduces the opportunity for the minority ethnic groups to get jobs.  The government policies have forced these communities into a position where they can no longer live on their lands or in houses, and many of them are now squatters living in poverty on one of the 400 squatter camps that are peppered around South Africa.  These Europeans have had to start using ingenuity to come up with ideas that will help their European communities who are suffering a great injustice.  One of these groups is the South African Family Relief Project which needs your help with either money or goods to improve the plight of our people.  If you wish to help these people, please donate via their website SAFRP.

Any money that can be donated is being used to purchase cheap land which can be turned into self-sustainable communal living quarters for those currently squatting.  This idea is wonderful and needs to be replicated to help our people around the world who are also suffering and in need of assistance.

Why White South Africans Can't Leave according to the SAFRP 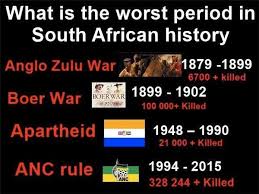 SAFRP are focusing on their Farm Project in 2016 to assist families to earn an income and improve their lives.  As stated on their Facebook page (7 January 2016), "Our aim is to acquire land, build low-cost housing, a skills center, and a preschool."  This page provides a clear list of criteria as to which families are selected to take part.  We hope that this will help with ideas on structure should you wish to set up a similar organization.

A decade has passed, yet the BBBEE has not brought South Africa into the utopia it promised.  Instead, corruption still reigns supreme, violence is so integrated into South Africa's very blood, no one blinks an eye and there is an ever-growing number of people living in poverty.  With a record number of 119 race-based laws, its recent history against  Europeans obtaining a job is the denial of minority rights,  Affirmative Action, corruption, economic destruction and land reform, it is jaw-dropping that the international community is not stepping in.

The very basis of the BBBEE is set up so that previously disadvantaged black South Africans are given jobs before Europeans which disadvantage the whites.  This setup allows for the transfer of resources to the victims which in this case is almost always the black political elites and leaders.

The main flaw to this is that at present, those considered the wrongdoers - the white farmers and business owners need to continue a state of privilege or wealth in order to continue paying the reparation.  Those that are unable to self-fund their wealth, shortly move into the increasing number of Afrikaner slums or become statistics in a large number of white farmers who have been executed.

The other main flaw of this is that in order for the black community to continue to receive their preparation, they essentially need to maintain a level of victimization and weakness.  If they are not weak or victims, then why do they need a program like BBBEE still over a decade later?  Critics have argued that all BBBEE was intended to do was allow a few black political elites to get into the financial action and produce no other change in the mean time.  The very reality of BBBEE is that the general community of black people obtains false hope that one day through this process they will be economically well off, yet their political leaders have simply sold them off to their own greedy agenda.

Are poor white South Africans being left behind?

White Genocide in South Africa
THIS IS THE FATE OF EVERY SINGLE WHITE PERSON ON THIS EARTH IF WE DON'T STAND UP AND FIGHT. THE TIME IS NOW!

South Africia Family relief Project needs to unite all Europeans into Community Based Organization ( Nation with in South Africa ).