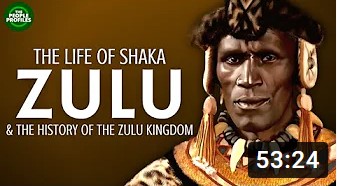 Shaka Zulu & The History of the Zulu Kingdom Documentary

the Money Power, Stephen Goodson tells us, and wanted to achieve independence for South Africa. He commissioned the Hoek Report from Professor Piet Hoek of Pretoria University, and the report showed that the Anglo American Corporation controlled the English language newspapers and 70% of all companies in South Africa, while paying 10% of the tax.